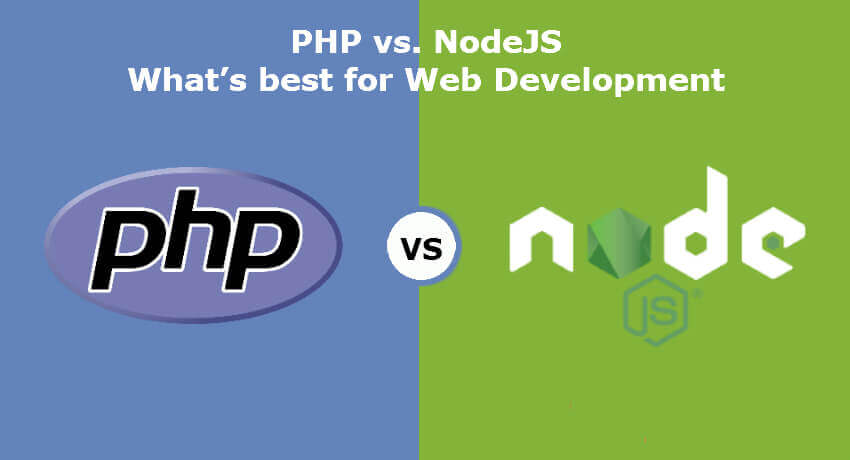 It won?t be an overstatement if we call PHP one of the most influential languages for web development of all time. Released in 1995 and currently running its 7th version, it was the de facto language for server-side scripting when the internet exploded in early 2000. Out of many well-recognized applications, Facebook is perhaps the most prominent examples built with the power of PHP.

Over the next decade, as the broadband became more accessible and mobile devices started to take the center stage, there was a need of more data-driven and responsive applications and that is where Node.js came into the picture in 2009. But before we go any further, it is worth mentioning here that Node.js isn?t exactly a language like PHP but more like a run-time environment that combines the power of JavaScript and Google Chrome?s V8 engine. Netflix and LinkedIn are perhaps the best examples of popular applications running on Node.js.

Since these two technologies perform the same basic tasks but are entirely different in their programming structures like syntax, context-switching, among others, there is no point in comparing those subjective matrices. Thus, we will only take a look at more relevant factors like performance, ecosystem, usability, among many others. Let?s see how they stack against each other:

For any technology to prosper, there is need of a favorable ecosystem of tools and community around it. Since PHP has been around much longer than Node.js, this is one aspect where it clearly has an upper hand.

PHP has a relatively large number of frameworks, many quality tools and scripts, and most of all, a mature community.

Node.js, on the other hand, is quickly catching up by levering the popularity of JavaScript. Since it is the language most of the front-end developers are already comfortable in, it has resulted in quick proliferation of Node.js developers and other resources.
Winner- PHP

This is actually a tricky thing to measure. Each language has its own structure that gives it leverage over certain tasks. If one is excellent at searching, other may beat it at sorting. So instead of getting into the illusion of benchmarks, let?s take a look at how each of their performance is suitable for different kinds of applications:

PHP applications weren?t exactly built with real-time applications in mind. So, if you want to create one using PHP, you will need to deploy many standalone processes and still may not achieve the expected level of results.

Now, one can well argue on the performance of one over the other, but that is an entirely different debate and we will just declare a tie here.

No technology is ever complete on its own and it is its capability to work with other technology that largely determines its usability.

PHP works in blocking mode, i.e., it can?t accept new requests until the server responds to it and thus, isn?t much effective for third-party applications.

Node.js is a clear winner here. It works on non-blocking I/O and hence, can easily handle multiple requests at a time and is ideal for third-party applications.
Winner- Node.js

PHP doesn?t run on its own and requires other servers, most commonly Apache to continuously run in the background.

Node.js is again more efficient in this aspect and one can easily create web servers.
Winner- Node.js

Node.js is currently far behind in this aspect but there still many decent hosting solutions are available.
Winner- PHP

So, if we go by numbers, the two technologies are almost head-to-head with no clear winner. But if you consider that Node.js is relatively new and still rising, it becomes evident that while PHP web development is holding its ground for now, it may not continue for long. Which effectively means that if you are looking for a cost effective solution immediately, you can proceed to hire PHP developer but if you are willing put the extra effort, Node.js may deliver better results.