To my readers due to the fact I live in southern California swine flu is out breaking like a rapid fire. I will continue to watch Google maps to see confirmed cases in the us & around the world what do you think about the pig flu swine flu out break. www.flusymptomsblog.com

The swine flu is likely a descendant of the Spanish flu that caused a devastating pandemic in humans in 1918?1919.Descendants of this virus have persisted in pigs; they probably circulated in humans until the appearance of the Asian flu in 1957, and re-emerged in 1976. Direct transmission from pigs to humans is rare, with 12 cases in the U.S. since 2005.

The flu virus is perhaps the trickiest known to medical science; it constantly changes form to elude the protective antibodies that the body has developed in response to previous exposures to influenza or to influenza vaccines. Every two or three years the virus undergoes minor changes. Then, at intervals of roughly a decade, after the bulk of the world's population has developed some level of resistance to these minor changes, it undergoes a major shift that enables it to tear off on yet another pandemic sweep around the world, infecting hundreds of millions of people who suddenly find their antibody defenses outflanked.Even during the Spanish flu pandemic, the initial wave of the disease was relatively mild, while the second wave was highly lethal. 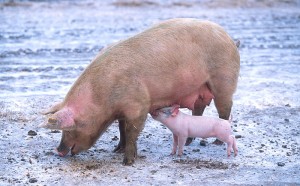 Pigs can harbor influenza viruses adapted to humans and others that are adapted to birds, allowing the viruses to exchange genes and create a pandemic strain.